Once again the earth has completed it’s sojourn around the sun and we have survived the Mayan apocalypse, the Christmas cheer and the wild New Year’s eve party in which we didn’t get home until 2am… on the 4th.  I would like to congratulate all the readers for making 2012 such a fantastic year for gentlemanly pursuits with Scotch sales up on last year and Matthew McConaughey movies down.

The elite team we assembled to rid us of McConaughey.  Unfortunately they got side tracked in Monte Carlo.

There has been adequate time to drown the debauchery of the holiday period in a bottle of Laphroaig and it’s time to get down to business, gentlemanly business.  Now let’s put an Alka-Seltzer in that first Scotch of the morning and knuckle down to some of the gentlemanly resolutions that you should be aiming for in the new year.

1. Try to look half as good as Cary Grant.  If there is one gentleman who knew style it was Grant.  He lived and breathed style, and sometimes even ate style.  For this coming year try to get that Cary Grant look (if you’re having trouble it might help to run away from some crop dusters).

Here Grant inconspicuously tries to escape from his style. Needless to say it didn’t work.

2. Learn to pose on a boat like Errol Flynn.  If there was one thing Errol Flynn was good at other than drinking, womanising and being arrested it was looking at home on a boat.  Flynn had the sea in his veins, along with a blood alcohol level of around 0.2%, therefore he knew the casual nonchalance of sailing like the back of his hand, casually spanking the backside of a lady.

Errol didn’t know where he was, what time it was or who he was, but he sure looked in his element doing it.

3. Don’t drink too much.  Water that is.  Recent statistics made available to The Gentleman have shown that water doesn’t taste half as good as Scotch and should be consumed with extreme caution.

Voted the healthiest person of 1954, Humphrey Bogart never touched a drop of water in his life.  This was partly due to the fact that he washed with gin.

4. Play golf with a mortal enemy.  This can achieve any number of things from lulling your enemy into a false sense of security, finding out what his evil plans are or getting a hat-throwing demonstration from his Korean henchman.  Just make sure you win.

Sean Connery proves who has the bigger balls.

5. Volunteer for something.  Being gentlemen of wealth, leisure and leather driving gloves, it seems only fair that we give something back to the people.  Also being masters of industry we have many skills that could benefit the wider community, such as champagne recognition, golf etiquette or how to entertain the visiting Japanese Ambassador.

Michael Caine was always the first to put his leather gloved hand up.

6.  Have some quiet time.  With all the constant drinking, smoking and Japanese Ambassador entertaining going on it’s hard to make time for yourself.  This year, get your secretary to schedule a meeting with yourself so you can unwind over a delicious smoke and a peaty Scotch. 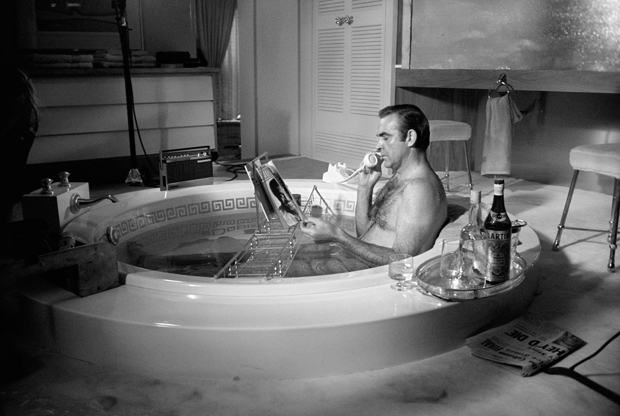 Busy at the office, Sean Connery phones his secretary to pencil in some much needed respite.