Gentlemen often find themselves in situations when they must pass long periods of time with the same people in the same place. This may be in a trans-subcontinental train voyage or just at a bar in Casablanca. There are many things that a gentleman may choose to do to keep him occupied, such as Scotch. I will outline a popular past-time here (that, fortuitously, goes very well with Scotch) – cards.

Edward H Griffith (a distant, yet close relative of mine) observes this game closely. Notice how seemlessly the pipe melds with the card-playing habitat.

I suggest you buy yourself a good deck of playing cards and keep it on hand at all times. You never know when you’ll be required to talk business over a few hours of poker, and you don’t want to be playing with someone else’s greasy cards. From experience, long poker games usually take place in a room with a single light and a well-stocked humidor.

They will also almost always feature Frank Sinatra in a visor.

You may,  however, find yourself in a much higher-stakes game of poker. This can be a high pressure situation, so I suggest you get a few (dozen) Scotches into you before starting. It has also been scientifically proven that Scotch-consumption and frequency of good hands in poker has a positive correlation. You do the maths.

A little known fact about the Great War was that it was settled by a poker game. Obviously, Laurence Olivier was playing for the Allies.

There are, of course, many other card games that you may choose to enjoy with your friends. They include, baccarat, whist, black jack and gin rummy.

As well as this game. It involves a tartan table-cloth, Clarke Gable and only three players get a seat.

Don’t forget that gentleman’s card games are invariably played over vast amounts of money and acres of land.

Dean Martin, seen here in his natural habitat, would always win more often when he had his revolver with him. We can all learn a lesson from that.

So I suggest that you fine-tune your skills in your card game of choice. And remember that if someone is caught cheating, it is customary that you flip the table and engage in a gun fight (if you want to avoid this, stay out of both saloons and the 1880s). 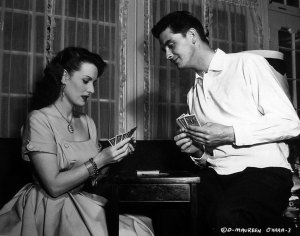 James O'Hara attemps to get a look at Maureen O'Hara's cards. A gun battle ensued.